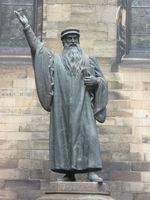 The word "presbyterian" describes a form of church organization overseen by elected elders, but Presbyterianism is also a well-defined system of beliefs ("doctrines"). The exaltation and interpretation of the Bible reached its zenith in the teachings and writings of John Calvin during the Protestant Reformation. Thus Presbyterianism - sometimes called Calvinism or "the Reformed faith" - follows his interpretation of the Bible. The Calvinism of Presbyterians is described in the Westminster Confession of Faith and the Larger and Shorter Catechisms.

Presbyterians share many basic beliefs with other evangelical churches, recognizing that earnest Christians may follow varying interpretations of the Bible in non-essential matters. But Presbyterians believe that the Reformed, Calvinistic doctrinal system best and most accurately reflects the Bible's teachings. Every Presbyterian officer, minister and elder vows that he believes the Reformed faith accurately reflects biblical doctrines and promises to step down from his leadership role should his beliefs ever change.

The strength of Presbyterianism lies in is its central loyalty to the Scriptures... its insistence that only in the Bible may we find what we must believe about God, His works and His ways. Only Scripture - our infallible rule of faith and practice - can guide us reliably to salvation. We believe Reformed doctrine accurately reflects what the Scriptures teach and that it contains nothing contrary to God's Word.

I. God's Sovereignty
Every Presbyterian belief is measured by one basic truth about God: He is sovereign in all things. The doctrine of sovereignty teaches that God governs His creation, His creatures, and all their actions. If loyalty to the Bible is Presbyterianism's great strength, its belief in God's sovereignty is its very life. By this doctrine, Presbyterians mean that God's nature and identity - not man's - unlocks a true understanding of reality. What God does - not man's achievements - is the key to understanding human experience. And God's works, not ours, provide salvation for us. When Presbyterians think of faith and even of ordinary events in people's lives, we think first of God.

We believe that man's purpose is to glorify God by doing His will and to enjoy Him forever. Life's highest privilege and meaning comes in serving the sovereign God who created us and sustains us.

II. Total Depravity
Presbyterians believe that all people are sinners as the result of Adam's sin, and we are so stained by inborn sin that, if left to our natural inclinations, we would inevitably turn to evil. Presbyterians do not believe human nature is neutral: it cannot freely move upward or downward depending on circumstances, environment, or education. Neither is human nature good ... capable of infinite development in goodness, needing only to be left alone or "brought out" to achieve perfection. Instead, human nature is sinful and inclined to evil. We observe undesirable behavior and sinful tendencies in the youngest infant, and we see that without discipline and restraint human beings inevitably live for themselves.

Presbyterians call this view of human nature "original sin" because human imperfection - sin - taints every facet of our personalities. Presbyterian teaching about original sin is summarized in the doctrine of total depravity: humanity, we say, is inevitably (originally) and altogether (totally) marked by sin on account of Adam's fall.

The doctrine of total depravity also describes humanity's helplessness. People are helplessly sinful: spiritually dead in sins, bound by the guilt and penalty of sin, and utterly incapable of pleasing God. None of our works is pure, and therefore none of our works can satisfy God. The Bible says all our righteousness is as filthy rags to Him. By ourselves, we cannot even to turn to Him for cleansing from sin.

III. Salvation
Presbyterians believe that while we were spiritually dead in sin, God loved us so much that He sent His only begotten Son to redeem us. The Lord Jesus Christ, who pre-existed with God the Father and by whom He created the universe, came to earth by being born of the virgin Mary. Jesus, God's eternal Son, took our nature, lived a sinless life as a man, and died on the cross as a sacrifice that paid the price of our redemption from sin; we do not know how, but we believe it. Triumphing over death, Christ rose from the grave and returned to the Father, from Whom He sent the Holy Spirit to apply the redeeming effects of His work to those who would believe. Through the gift of the Holy Spirit, received by grace through faith, our originally sinful nature is transfigured to become godly. This "new life" begins immediately in the hearts of those who believe in and receive Jesus Christ, and it will continue eternally.

IV. Election
Consistent with the doctrine of sovereignty under which God is seen to determine all things, Presbyterians believe that God also provides the knowledge of and acceptance of Christ which leads to salvation. Our personal redemption is not due to any goodness of our own, for we have none; neither is it earned by our good works, for sinners can do nothing to merit redemption. We find Christ because He first finds us. We love Him because He first loved us. We become His because He chooses us, calling us and sanctifying us after He justifies us.

Presbyterians do not pretend to understand God's election of some to salvation but they know they did not seek God until they were sought, they did not know Him until He enlightened their hearts, they did not believe until He gave them faith, and they did not come until they felt themselves moved. We cannot fathom the mysteries of His will, but we know that without Him we would not be where we are.

The doctrine of election is dear to Presbyterians because it honors God's sovereignty in all human affairs and because it assures those who trust the Lord Jesus Christ in a way that no dependence on themselves can do. Such faith assures us that all things work together for good to those God calls, and that nothing can separate them from the love of God which is in Christ Jesus now or in the future. This assures believers that they can go forward boldly wherever God leads, eternally secure in God's love sealed by the Holy Spirit.

V. Sanctification
Presbyterians believe that as the Election of God calls men to redemption in Jesus Christ so it calls them to newness of life in Jesus Christ. The Holy Spirit not only makes a child of sin to become a child of God, He also leads the new believer into a new way of life which is in conformity to the will of God into holiness of life in Sanctification.

We believe that every Christian will show forth in his life the fruits of a living faith; that he will grow in spiritual maturity and in patterns of living which will increasingly conform to the will of God for him. We believe that love, joy, peace and all the other characteristics of godliness will necessarily become evident in his life as the Holy Spirit increasingly takes charge; that he will more and more "live unto righteousness" as he moved towards the "measure of the stature of the fullness of Christ". As love of God increases within him, love for his Christian brothers and for his human neighbors everywhere will correspondingly increase.

To this end, Presbyterians believe in the necessity for utilizing the "means of grace": prayer, worship, and most especially, the study of God's Word.

VI. The Church
Presbyterians believe in the holy catholic church; that is, in the universal unity of Christ's Body in time and eternity; as a vine and its branches comprise a single whole, so Christ and all those in whatever place or age derive their life from Him and comprise a single Body, the church universal. This church is not to be identified with any denomination or body on earth for it exists wherever a true child of God may be found. We believe that there are Presbyterians who belong to this church and there are Presbyterians who do not belong to this church; likewise, there are Baptists, Methodists and Roman Catholics who do belong and there are those who do not.

Because Presbyterians believe in the holy catholic church, they also believe in the Communion of the Saints; the corporate practices of the Christian life. Christian living is not a solitary thing. We believe it to be the Lord's will that Christians congregate in churches for worship, for service, for growth in grace and mutual edification. The Church universal is reflected in those corporate manifestations of Christ's Body in which the ministry of the Word, the administration of the sacraments, and the exercise of government and discipline according to the New Testament pattern establish and enlarge the household of faith.

VII. The Sacraments
Presbyterians believe in two sacraments or sacred rituals: baptism and the Lord's Supper. We believe that they are visible signs instituted by Christ Himself, which confer the blessing or grace of God when appropriated in faith. We do not believe that any blessing is inherently present in the sacraments themselves, but that they are instead the signs and seals of the blessing they represent. As the Holy Spirit does not dwell in the pages of a book, so grace does not reside intrinsically in the sacraments but comes to the believer who receives them in faith.

The sacrament of baptism signifies and seals God's covenant promise to be a Father to His own and to their children, visibly representing how this promise is carried out in the Holy Spirit's coming upon the life of the person in whom the promise is fulfilled. It belongs to any person in whom there is reason to assume that the promise is being fulfilled, that is, on anyone professing their faith or setting up a household of faith. Presbyterians believe that children of believers may be baptized when a household of faith is set up and the conditions of prayer and worship are met as evidence of the Holy Spirit's presence in the hearts of their believing parents. Because we have visible and historical evidence that children in Christian homes may grow in the true nurture and admonition of the Lord, we believe that the sign and seal of the Lord's presence - baptism - belongs to such children.

The Lord's Supper - also known as Communion or the Holy Eucharist - helps Christians remember Jesus' death until He shall return. It is a sacrament in which He is truly though spiritually present and by which we truly though spiritually receive His grace and blessing. As God's Word conveys grace by providing opportunities for the Holy Spirit to speak to human hearts, the Lord's Supper conveys the benefits of the death and resurrection of Christ to believers who receive the sacrament in faith.

Presbyterians believe that the Lord's Supper is not owned or controlled by any person, congregation, sect or denomination. It is the Lord's. We come as guests of Him who issues the invitation and who distributes His benefits according to His will, so we do not believe that we can grant or withhold the dispensation of grace. We have no authority to bar any believing Christian from being fed by Christ at His table, so we practice open Communion.

VIII. The Resurrection and The Life Everlasting
Presbyterians believe in the literal return of Jesus Christ to "judge men and angels at the end of the world." Until He comes, we believe that the souls of true Christians who die depart to be with Him "where they behold the face of God in light and glory, waiting for the full redemption of their bodies." At the last day, we believe that the dead will be resurrected and the living will be changed. Christ's elect will be raised to reward and everlasting life, but reprobates will rise to dishonor and punishment with everlasting destruction, banished from the Lord's presence and glory.