Founded over 150 years ago

The year was 1846. South Carolina had ratified the federal constitution only 58 years earlier. And now, a new work was beginning in the community of Walnut Grove. On August 23, Mount Calvary Presbyterian Church was organized by Rev. C.B. Stewart, in the home of Mr. James Nesbitt near Roger’s Bridge on the Tyger River in lower Spartanburg County. There were six charter members: Mr. James M. Nesbitt and his wife, Mrs. Elizabeth D. Nesbitt, Mr. Martin O. Miller and his wife, Mrs. Jane Miller, Mr. Robert McCarley and his wife, Mrs. Jane Caldwell McCarley. As its first order of business, the church elected ruling elders. Mr. Miller and Mr. McCarley were duly elected, ordained, and installed in this office. On October 2, 1846, represented by Mr. McCarley, Mount Calvary was enrolled in the Presbytery of South Carolina, a member of the then Presbyterian Church in the U.S.A.

For four years, this small congregation worshiped in the open air and in the home of Mr. Nesbitt. Through their combined efforts the church built a simple structure, thirty-by-forty feet in size, at a cost $2,000. This structure served as their house of worship for thirty-five years. During its early stages of growth, Mount Calvary’s pulpit was filled by faithful Gospel ministers including Rev. C.B. Stewart, Z.L. Holmes, A.A. Morse, Z.M. White, and A.L. Miller. Some of these served as supply preachers, others merely visited the church for a short time. Thirty members were added during the first thirty-five years of the church’s existence, and grew considerably under the able ministry of Rev. R.H. Reid and Rev. E.F. Hyde.

In 1881, the church moved to a central location about three miles north to the Walnut Grove Post Office. The church went without a pastor until 1882 when Rev. A.A. James was secured as pulpit supply. This relation continued until 1885 when he began to serve as the regular pastor of the church, and did so until 1897. Early in Rev. James’ ministry, the church dedicated its second house of worship on August 26, 1882. After Rev. James’ departure, the church enjoyed the preaching of Rev. C.B. Ratchford (1900-1901), and Rev. B.P. Reid (1902-1908). During Rev. Reid’s pastorate, the congregation once again outgrew its building, and a new church became necessary. Construction of the third Mount Calvary Presbyterian Church finished in 1904, and on August 27, 1905, the congregation dedicated this new building to the glory of God.

In 1953, Rev. Ray D. Davies became Mount Calvary’s first full-time pastor. Because of the growth, the church was able to add a new educational building, called the O’Connor Memorial Building.

Mr. Edwin Graham became the pastor of Mount Calvary on April 15, 1962. On August 7, 1963, the church was struck by a bolt of lightning. The resulting fire completely destroyed the building. As a result, services were held in the O’Connor Memorial Building. During this time, plans were made for the construction of a new church, the fourth, just a few hundred yards north of the old site. Construction began in July 1965 and finished on August 28, 1966. At a cost of roughly $200,000, the church had a new facility.

In September of 1966, Reverend Edwin Graham accepted a call to another field of service. After this, Mount Calvary did not have a regular minister for nearly five years. On February 23, 1969, the congregation met issued a call to Reverend Henry Benchoff. He accepted the call and preached his first sermon on Easter Day.

Out of Darkness, Light 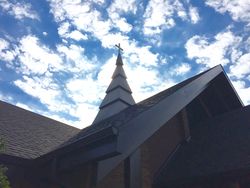 The year 1973 was a time of testing for the congregation. Due to growing theological liberalism in the Presbyterian Church in the United States, Mount Calvary decided to withdraw from that denomination and unite with Calvary Presbytery in the newly formed Presbyterian Church in America, initially called the National Presbyterian Church. Reverend Charles Champion succeeded Reverend Benchoff, beginning his ministry on January 1, 1981. He ministered at the church until August 21, 1983. During his pastorate, a new educational wing was added. On May 13, 1984, Reverend David Alexander was installed as pastor. He served until April 1992. Succeeding Reverend Alexander was Reverend Robert Baxter who was installed on August 8, 1993. He served the church until his retirement in April 2000. During his pastorate, a gymnasium and classrooms were built and called the Family Life Center.

In August 2001, Mount Calvary called Reverend Richard M. Thomas, a native of Upstate South Carolina, to be its pastor. Reverend Thomas, then associate pastor of Woodruff Road Presbyterian Church in Greenville, accepted the call and was installed. As of the publication of this history, he continues to fill the pulpit at Mount Calvary and has been its longest-serving full-time minister. Under his ministry, the church expanded its existing sanctuary to add a balcony and additional seating on the main level. This sanctuary was dedicated to the glory of God

In 2006 a Spanish-language outreach was begun to the Hispanic and Latino communities in the Spartanburg area. Iglesia Presbiteriana Monte Calvario began as a Sunday School class and now meets weekly for worship on Sundays and for Bible study on Wednesday nights. As well, planning meetings began in 2009 for a church plant targeted to the central Spartanburg community. Bible studies commenced in downtown Spartanburg in January 2010. The church was officially particularized in Calvary Presbytery on January 23, 2017, with Reverend Justin Kendrick installed as pastor.

It is difficult to summarize over 170 years of ministry in a short space. We give thanks to our covenant-keeping Father who has watched over and protected the work of Mount Calvary.There were dark and discouraging days, but by the enabling grace of God, the work continues and the Lord graciously showers his countless blessings upon a people dedicated to the proclamation of his inerrant Word.